As I mentioned in my last post, I am participating in a community art project called Got Art Collaborations.  This project is giving me a chance to experiment with different artistic media, some that I have never tried before and some that I haven’t thought about in years.  Through the project, I am also getting to meet many talented people from New Jersey and the surrounding area.  I’ve never participated in anything like this before, and I’m especially excited to be a part of the group’s inaugural project.

Andy Maskell, the man who started Got Art Collaborations, took the time to give me some inside information about his inspiration and the reasons behind why he started this project.

“For as long as I can remember,” Maskell says, “I’ve always liked what other people could produce artistically better than what I could do on my own.  I’ve never thought of myself as a particularly creative or artistic person.  In high school as a senior I took freshman level art as a graduation requirement.  After the first few weeks the teacher could sense my discomfort (and likely my lack of ability) and allowed me to mostly slide by unnoticed.  After college I travelled a bit, and started writing stories about my encounters and sharing those stories through email to my friends and family.   I got a lot of positive feedback, and I suppose that was the first time I took pride in something I was able to create.  But I’ve gone incredibly long stretches without creating anything, and when it comes to aesthetics I feel like a dancer with lead boots on.”

Lead boots or not, Maskell knows what it is to be inspired.  He says, “The complete experience of that inspiration is impossible to describe, but essentially I connected to a work of art in a way that I never had before.  It was a single moment that I can point to that dramatically changed my thinking.  Looking back on that moment, I wanted to construct an art project that told the story of that moment, that single inspiration.  And I thought it was appropriate to tell the same story through as many different media types as possible – sculpture, painting, poetry, song, interpretive dance, etc.  The problem was, I had limited ability to create, I knew I would be mostly unsatisfied with anything I could produce myself, and even if I was able to produce what I wanted I had no idea what to actually do with it.  I knew I needed some help.”

Not exactly sure what kind of help he needed, Maskell began actively seeking artists over the next several weeks.  When his path eventually crossed with Priscilla Algava, something clicked. Maskell describes the synergy of their first meeting by saying, “After I explained my inspiration and my intentions for a project, it was actually her idea to bring multiple people together and create a community based project.  Once she planted that seed, the idea grew.” 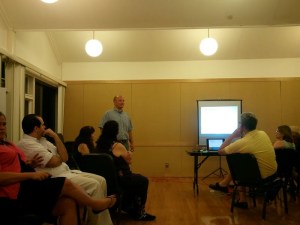 Andy Maskell presents his idea for the project to a group of curious artists and friends.

Maskell and Algava began to reach out to artists and others who they thought would appreciate this type of project.  Approximately  30-35 people attended the initial meeting, and about  20 asked to remain in contact.  “I’m not sure how many people will actually stay involved through the final project,” Maskell says, “but I’m extremely happy with the turnout and enthusiasm so far.  It is absolutely incredible to me to hear others share with me their ideas for the project.  The fact that I essentially am having my own thoughts reflected back to me after being filtered through another person’s brain is a totally unique feeling.”

As far as what specifically is inspiring him to create his own art these days or what type of art he is creating for the show, Maskell isn’t saying.  All along, Maskell has intentionally tried to keep aspects of the project secret.  He has found that curious people become enthusiastic people, and he wants people to be enthusiastic about art.   “I recognized that cultivating an air of mystique is a healthy way to generate a crowd.”  Additionally, Maskell hopes that the project, because it is a collaborative effort, will evolve and change over time and says, “I don’t want to set expectations or ideas that will end up being changed before the final revealing.”

“I am not an artist,” Maskell insists.  “I don’t have any special talents or magical knowledge.  Organizing this group is a step way outside the routines of my life.  It has taken a significant amount of my time and energy to get the ball rolling, and once I push it down the hill I have no idea of the exact direction it will go.  But I’m really looking forward to watching the development and being part of something bigger than myself.”

I, too, am thankful for the opportunity to be a part of this project.  I will bring you more information and details as they are revealed.

Stay curious and stay enthused — more art is on the way!

School is out for the summer, and I am excited to blog again!

The first of many wonderful NJ projects I have in the works right now is a community art project called Got Art Collaborations.  I got involved with the art project a few weeks ago.  The shortened version of the story is that a good friend of mine, Andy Maskell, decided that he wanted to put together a community of artists all creating different kinds of art around a centralized theme.  Andy’s story and his inspiration for the project is pretty cool, and I will certainly share that with you in the near future.

In the mean time…

But I can tell you that the experience is already fabulous.  Along the way, I hope to document my role in the project and also share the stories of the other artists and mentors with whom I’m working.

Once the date and location of the art  show is announced, I will share that too.  🙂

These days, my writing projects are very educationally-focused.  While travel writing is still a dream and passion of mine, my other passion – teaching – is demanding front and center stage.

The summer promises time to travel (both in and out of state), so there will be plenty more to write about then! 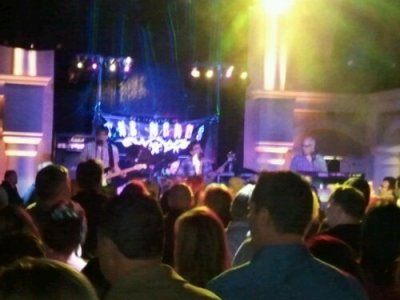 Ending the week and starting the weekend at Rho with the Nerds! Haven’t seen these guys in years and they are still great!

Trying out the reblog feature here on WordPress with this great post by fellow NJ blogger and NSNJ contributor, CC Fowler.

CC is my role model these days because she is so consistent in her postings, despite being so, so very busy!  Looks like I can’t order the photos around in my post.  Be sure to check out CC’s blog, CentralJerseyWorkingMoms, for the rest of this post and many, many more great posts.

Thanks to the wonders of modern technology, six tired mommies logged on to their Google accounts and met virtually to chat and share tips, suggestions and laughs.  Despite a few technical glitches among the group, we spent the better part of 45-minutes discussing morning routine madness and how we cope.

In all honesty, we could have discussed anything or everything and we would have still enjoyed the conversation.  Just having these ladies, mothers and now friends to chat and laugh with after a long day at home and the office was enjoyment enough.

So I think this little simple, feature of a Virtual Chit Chat has legs to move it into another week.   We’ll be back chatting on Thursday, March 22nd at 9pm.  Won’t you join us?

Special Thanks to The…

Today, I saw my first hockey game.  The Trenton Titans played in their home stadium, Sun National Bank Center.  (They didn’t win, but it was a great game and a fun time.)

Post game, at 7:00, the Philadelphia Revolution (a league for 15-20 year olds) have taken over the ice and are playing a game of their own. 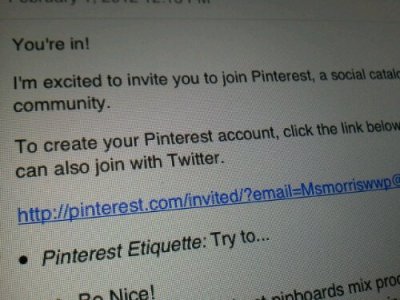 Not sure what this all means just yet, but I got my invitation to Pinterest tonight!

Anyone using this in school right now? Going to check it out…

Lately, New Jersey media, including WCTC radio, have been buzzing about a new book called No More Dating Pigs — You Are What You Date. The book is written by New Jersey writer, Norah Marler.

I received a copy a few weeks ago, and made curious because of the title, it moved up to the top of my reading list. I’m just getting a chance to take a look at it now…full review will be on NSNJ soon.

M-F of this week screamed for a little R&R this weekend, and I am happily answering the call!

Promote Your Page Too

All work posted on this blog is the property of Melissa Morris unless otherwise stated. No material from this blog may be reproduced without permission from Melissa Morris.
The Jersey Girl
Create a free website or blog at WordPress.com.
Loading Comments...