My summer "stuff" on the Asbury Park beach.

This Picture Perfect Sunday I want to share a photo I took earlier in the week. It’s not a rolling landscape or a breathtaking sunset; it’s just my beach towel and bag, my summer “stuff.”

These items are old, and worn, and I absolutely love them.  They’re only used in the summertime, and their wear is strictly – and proudly – from their use on the beach and at the pool.  Just the site of these items reminds me that it is a time to unwind, relax, and enjoy.

I couldn’t think of a more appropriate photo to share with you, on this fine, summer, Picture Perfect Sunday of the holiday weekend.

First Day of Summer “Vacation”
The first official day of my summer “break” began yesterday with a trip to the beach.  Ahhh.  When it came down to deciding if I should head “down the shore” for the day or not, I looked ahead at the rest of my week and knew I had to go!  (I will be in meetings for the next three days, and the forecast looks a little cloudy/rainy.)  It was an absolute no-brainer.

I went to the beach in Asbury Park and enjoyed my coffee on the not-too-crowded beach.  Usually addicted to my cell phone and never without my camera too far away, I was sans both yesterday!  At first, I was upset about this and did contemplate, for a split-second, actually turning around to go get my treasured electronics, but once I was on the beach, it got easier and easier to forget that I didn’t have them with me.

It was actually a pretty serendipitous occasion as the book I brought to read on the beach was Jon Krakauer’s Into the Wild.  No, I don’t imagine that I’ll be giving up any more luxuries or leaving society any time soon, as the subjects in the book did to brave the wild and connect with nature, but it was nice to read a book about survival without my phone near by – and with only my memory to take pictures of the day. 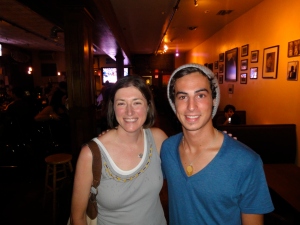 Brooke Kirby and Quincy Mumford at Jamian's in Red Bank.

Catching Up
Last week, or a few weeks ago (really, I’m totally losing track!) I got to see Quincy Mumford play at Jamian’s in Red Bank.  I was really excited about this performance because a good friend of mine, Brooke Kirby, has been talking to me about him for years!  She’s known him since he was a little boy, playing guitar for hours and hours in local record stores, for anyone who happened to be there at the time.

Now, this young – but already quite accomplished  – New Jersey native, whose work has been compared to Sublime and Jack Johnson, is writing and performing his music for much larger, and intentional audiences.  He’s already released three CDs and performs pretty regularly in New Jersey and the surrounding areas.

Mumford and his band will be playing shows in the area all summer.  You can find them on Thursdays performing at Jamians in Red Bank, and for more show dates and information, you can visit his website.

Check out one of my favorite Quincy Mumford songs, “Lifted” from his second CD called South Edgemere.

Promote Your Page Too

All work posted on this blog is the property of Melissa Morris unless otherwise stated. No material from this blog may be reproduced without permission from Melissa Morris.